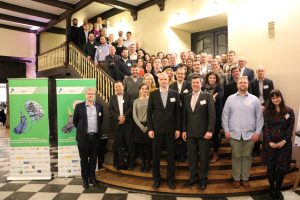 Representatives of the EU-SysFlex project met in Tallinn last week for a two-day convention, marking the end of the project’s second year. After last year´s General Assembly, organised by Portugal´s EDP, this year’s convention was hosted by the Estonian transmission system operator Elering, one of EU-SysFlex´s consortium members, in the Estonia´s historical House of Blackheads. The convention consisted of the EU-SysFlex’s Project Management, Advisory Board meetings and a General Assembly.

EU-SysFlex was launched in November 2017, when its first General Assembly took place in Dublin, Ireland. Funded by Horizon2020, the research project will run until 2021. The consortium is made up of 34 organisations including transmission and distribution system operators, technology providers, aggregators, consultancies as well as academia and research centres from across 15 countries.

Tallinn Convention was focused on the past 12 months during which the EU-SysFlex project has made excellent progress regarding its project objectives, published more than 10 public deliverables and successfully submitted the first official report to the European Commission, with the Technical review meeting taking place in June 2019.

Throughout the project’s second year, EU-SysFlex team organised a joint Horizon2020 workshop: TSO-DSO cooperation in flexibility market integration, hosted panel discussions at the Wind Energy Science Conference, at the SEST Conference and at the Energy Data Access Conference. The project was presented at events such as the annual InnoGrid conference, EU Sustainable Energy Week and Wind Integration workshop 2019. The German demonstrator within the EU-SysFlex project has been nominated for the Global Power & Energy Elites of 2020.

In the first half of 2019, project partners started to regularly publish articles on the project’s blog website and created a project brochure in order to provide and share comprehensive information about the project.

The project’s third year will be kicked off by a public policy workshop, which will take place on 4 December 2019 in the European Parliament in Brussels. This high-level stakeholder event will discuss the future EU power system and how a higher share of renewables can be integrated.

We use cookies to ensure that we give you the best experience on our website. If you continue to use this site we will assume that you are happy with it.OkPrivacy policy