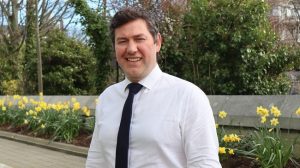 There is no doubt that when it comes to how we produce and consume electricity, sticking with what we know is not going to cut it. The world is in the midst of a climate crisis, and it appears that it will only get worse before it gets better.

Among the long list of changes that need to be made is the continent’s energy grid; one built around centralised systems with large energy plants which, in many cases, use fossil fuels to produce electricity. However, the rapid adoption of renewables on to the grid – in particular, wind and solar – means the days of centralised grids could be numbered.

Read an interview with John Lowry, project manager of EU-SysFlex and EirGrid, who spoke to Siliconrepublic.com about the main objectives EU-SysFlex project aims to achieve.

Could you briefly explain the EU-Sysflex project?

Established in 2017, the EU-Sysflex project is being delivered by a broad energy sector consortium from across Europe. The consortium is proudly led by Ireland’s electricity grid operator EirGrid.

It receives funding under Horizon 2020 and involves 34 organisations from 15 countries across Europe with a budget of €26m.

The project is fundamentally about addressing the needs of the pan-European power system as we transition to a low-carbon, renewable energy-driven Europe. The challenges are enormous, not just in terms of the scale of renewables that need to be built, but how we integrate those sources of energy onto the grid while maintaining reliability, stability, efficiency and resilience.

Today in Europe, renewables meet approximately 30pc of our electricity needs. The ambition is to increase this to 50pc by 2030 and to be fully decarbonised by 2050. Meeting our 2030 targets will require transformational change across Europe, we will see almost a doubling of renewables such as wind and solar.

In addition, where electricity is sourced will change significantly. To date, electricity grids are centralised with a relatively small number of large power stations providing our energy needs.

However, this is changing. Where we source our electricity is becoming more decentralised with more smaller-scale renewables spread across our grids. For example, we are seeing the beginnings of residential power generation through rooftop solar.

Also, how we use electricity is changing in transport and heat. We are seeing technological advancements creating greater consumer participation and choice in how our energy needs are managed; for example, the use of in-house controllers for heating our homes and water.

This presents new challenges for power system operators across Europe such as EirGrid. EU-Sysflex is providing the much-needed research and innovation required to bring all of this together while seamlessly operating the system and ensuring the lights remain on.

Is it now impossible for a national grid to work independently from other nations?

There is no doubt that a more interconnected network with other countries provides many benefits. This includes from energy balancing, market efficiency, renewable energy facilitation and power system resilience perspectives.

These are some of the reasons why we are enhancing our interconnection to mainland Europe via the development of the Celtic Interconnector. If we look at European policy, it recognises the synergies of broader integration across market development, system operation and regulatory regimes. The future is a European energy union!

What role does energy storage have with EU-Sysflex and Ireland’s energy security?

Energy storage has been in existence for many decades primarily through hydroelectric power generation.

In fact, the majority of renewables today…read more