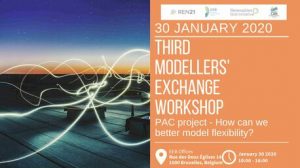 innogy SE,  EU-SysFlex project partner and one of the leading companies in distribution grid in Europe,  will be attending the 3rd Modellers’ Exchange Workshop to present the EU-SysFlex project and the German demonstrator. The workshop will take place on January 30, 2020 at the European Environmental Bureau office in Brussels (Rue des Deux Églises 14, 1000 Bruxelles, Belgium).

Workshop will be in the context of the PAC project – Paris Agreement Compatible Scenarios for Energy Infrastructure and the presentation of EU-SysFlex as a pilot project will focus on how flexibility will change the behavior of distribution grids in the real world.

The workshop is part of a collaboration between the Climate Action Network Europe, the European Environmental Bureau, ENTSO-E, ENTSO-G, REN21 and RGI launched in December 2018 to see how to reflect the targets of the Paris Agreement in the TYNDP scenarios and to form a widely accepted and robust Paris Agreement compatible European energy scenario for Europe.