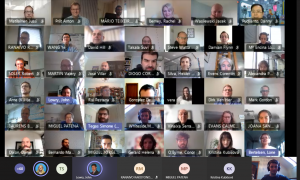 Despite a turbulent year due to the ongoing pandemic, partners of the EU-SysFlex project met last week online to discuss the project’s development. Representatives of 34 partner organizations discussed all of the important results, but also the challenges faced during the 3rd year of the H2020 project. As this year’s  General Assembly was initially planned to be held in Paris, project partners were greeted by the EDF R&D Deputy Director Carmen Muñoz. Liam Ryan, Chief Innovation & Planning Officer at EirGrid, Ireland’s TSO, delivered closing remarks of the meeting. Project partners presented a new project video focused on the demonstrations within the EU-SysFlex at the meeting as well.

EU-SysFlex is a Horizon 2020-funded project which addresses challenges of the European Union to deliver at least 50% of its electricity consumption from renewable sources of electricity by identifying and demonstrating new types of system and flexibility services.…read more