Seán Kelly MEP on renewables: Member states should look at the big picture 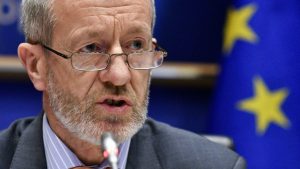 Intermittent renewable electricity will need backup for at least the next 20 or 30 years, says Irish MEP Seán Kelly. As the least dirty among fossil fuels, natural gas is probably the most cost-effective and “preferred option,” he argues.

Kelly is EPP shadow rapporteur for the recast Renewable Energy Directive, which is currently being negotiated in three-way talks between the European Commission, Parliament and Council.

In early March, he hosted the launch event of EU-SysFlex, an EU-funded research project in which EURACTIV takes part as media partner.

Negotiations on the renewable energy directive have started between the European Parliament and EU Council. The Parliament voted a 35% target for 2030, EU Council wants 27%. Where will they meet?

It’s going to be a big discussion. The first trialogue took place on 27 February, but we didn’t really get down to any details. We outlined our positions. I would hope that at the end of the day we will be closer to 35 than to 27%.

The European Commission said that the target should be higher than what it proposed two years ago because energy costs for renewables have come down dramatically, especially for wind and solar. And it has recently produced a report saying we could go to 34%.

If a target higher than 27% is cost effective, why don’t the member states agree?

Probably because they are afraid that it might not be cost-effective and require too many changes. And, of course, they are reluctant to spend money in this field, when people want them to deal with social issues like housing and health.

But we have to try to make them look at the big picture. This is really all about housing, health, environment and the future.

Available also in German and Slovak