Elering CEO Taavi Veskimägi: “We can empower the consumers with data” 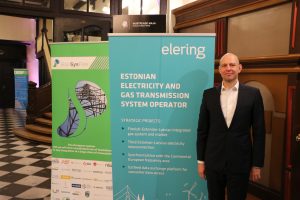 What is Elering’s core business?

Elering is Estonia’s electricity and gas transmission system operator. Our main mission is to keep the lights on and the homes heated.

What is your role in EU-SysFlex?

We are mostly interested in data exchange, especially cross-border. Maybe you are aware that we developed a data exchange layer Estfeed. This is where our main interest comes from. We want to integrate not only the wholesale market in Europe, but also the retail market. Currently there is still a lot of struggle for market participants if they want to participate in different retail markets. Even neighboring countries – you have to build different interfaces to really get the data from different grid operators. I think the EU-SysFlex project may standardize approach to different grid operators and give us better access to markets. Equipping consumers with data would also put the consumers in the center of the whole energy system. We can empower our consumers with data. This is the reason why we are in the EU-SysFlex project.

It is rapidly increasing. In the third quarter it was around 20 percent of total electricity consumption. We see here in Estonia that the European trading scheme (ETS) is really effective. Because of the carbon price increase we are phasing out from oil shale based power very rapidly. It means that renewables have more and more access to the market. There is also a growing interest in renewables, not only because of the subsidies, but also the market. Share of renewables might increase here in Estonia very rapidly.

What is the biggest challenge in integrating more renewables in the grids?

We are very market-minded. We like phasing out every kind of subsidy. Maybe those price signals are not there yet. There are so many market distortions, so we have to get the market to really be well-functioning and also go cross-border in a more integrated way with the power market. This would really help a lot, especially to integrate large-scale renewables in the system. If you talk about Baltic sea and the wind capacity, there is definitely no point in building large-scale installation in Baltic sea and integrating it only into Estonian market. Estonian market is such a small one that you would definitely need to approach a wider regional market. We believe, and many studies show it, that if we work even more closely together we can achieve our climate targets even faster and cheaper.

What is the role of digitalization in raising the share of renewables?

Data definitely have a big role to play. Not only for consumers, but consumers firsthand. I spoke about the large-scale installations, but what is really booming here in Estonia and other European countries are small-scale solar installations. Digitalization really plays a central role here. It allows to trade with large-scale market players Since Estonia doesn’t have any regulated prices, it means that basically if you have an efficient control system in your house, you can sell your own produced electricity when the demand is high and consume at times when it is cheaper or store in your house. Without the data and efficient data management, this would not be possible. It is also good that we have both central electricity and gas data hubs in place here in Estonia. We have a full rollout of electricity smart meters and we also want full rollouts of gas smart meters that allow for small-scale sector coupling which even takes place on the household level – households can switch from electricity to gas and data are the central player there.

What do you expect in the EU-SysFlex’s next year?

As a practical person, I would like to see the real outcomes from the project. For Elering this is really important because we are running another Horizon 2020 project INTERRFACE as well. It is about a flexibility platform and we are there with Finnish and Latvian colleagues. I would like to see synergies between the EU-SysFlex and INTERRFACE projects.

Want to learn more about EU-SysFlex?